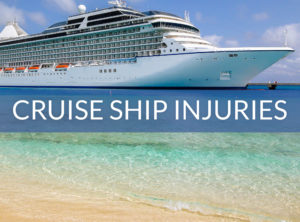 Cruise lines, such as Royal Caribbean Cruise Lines, Celebrity Cruise Lines, Carnival Corporation and Norwegian Cruise Lines are headquartered in Miami, Florida.  Most passengers do not realize that the cruise ticket they buy from those big companies is a contract for carriage. The fine print in ticket contract governs where the passenger can bring a lawsuit, called a venue provision.

Most lawsuits against the Cruise lines are required to be brought in Federal District Court in Miami. It also shortens the time in which a lawsuit can be filed down to one year as compared to most land based claims which allow two to four years to bring suit.

Cruise ship operators are large corporations with vast financial resources.  They will fight these claims in court, and will not pay attention to smaller claims because they know a lawyer will have to make the proverbial Federal case out of claims.

Attorney Alex Perkins has handled cases against most of the major cruise line operators in Florida including Disney Cruises.

He is familiar with their defense tactics and most of the lawyers on the their side. Mr. Perkins has also handled numerous cruise ship injury cases in Federal Court including a crewmember on passenger rape that yielded over $1,700,000 for the victim.

INJURED ON CRUISE SHIP?
If you or a loved one has been injured as a result of an incident aboard a cruise ship or stemming from a cruise, contact us now!

Slip and fall injuries are the most common complaint we come across from passengers, in particular on outdoor decks.  Mr. Perkins has conducted extensive discovery and obtained Federal Court orders pertaining to the materials used on the decking of ships and the number of prior falls on thereon.

If you or a loved one has been injured as a result of an incident aboard a cruise, ship or stemming from a cruise contact Perkins Law Offices at [email protected] of call for a free confidential case review at 305 741-LAWS (5297).