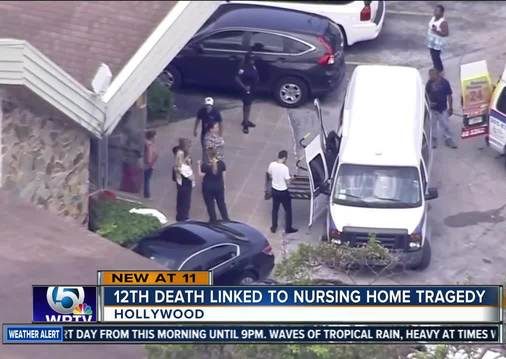 Firm puts the Center, Larkin Community Hospital and other affiliated entities, on formal notice that a lawsuit has been filed against them.

Though Simboli managed to survive the stifling heat, she had complained that the heat was killing her. Attorney Alexander Perkins of Perkins Law Offices met her for the first time while she recovered in another facility.

There, she told him: “I complained that the heat was killing me. It was very hot, very hot and uncomfortable…I can’t believe they let people die there.”

As the facts and timeline of events become more clear, the descriptions and complaints made by many of the surviving patients and their family members refute both the nursing home’s and Florida Power & Light Company’s claims.

Perkins Law Offices has put the Rehabilitation Center of Hollywood Hills, LLC, as well as Larkin Community Hospital and other affiliated entities, on formal notice under Florida Statute Chapter 400 that a lawsuit has been filed against them (Case Number CACE17018178). Initial admission paperwork from the Rehabilitation Center of Hollywood Hills obtained by Perkins Law Offices states the facility is owned by Larkin Community Hospital.

“The Rehabilitation Center was nothing short of grossly negligent,” said Perkins. “Their conduct is indefensible, but they will still try to avoid the consequences. We will not let that happen and intend to take action against all of those responsible.”

Perkins Law Offices has a successful track record of representing elderly clients who have been victims of personal injury, wrongful death, civil theft and fraud.

Hi, if you need legal advice regarding any type of legal matter such as car accidents, ship cruise injuries, storm or hurricane damage claims and/or any type or personal injury claim, we can help you. Call us now at 855-741-5297 (LAWS) and we will be glad to give a free consultation about your case.

Perkins Law Offices Perkins Law Offices 36746263 accident attorney miami and Accident attorney miami Rated 5 / 5 based on 5 reviews. | Review Me
$0 In stock
Value purchase - by Ian Morrison, November 25, 2019
5/ 5stars
My Nevada based company needed a Florida litigator to represent us in a business dispute against another company. Alex Perkins of Perkins Law Offices in Miami came highly recommended by another attorney fiend of mine in Las Vegas and I was not disappointed. Alex personally handled the case, crafted the litigation strategy, and kept us in loop at all times until he brought the case to a successful resolution in our favor. We did not just settle, we totally defeated the other side. As an experienced businesses man and entrepreneur running a multi-million dollar company, I have dealt with my share of lawyers and lawsuits. I can say with confidence that Alex and his firm are top notch trial lawyers
Value purchase - by Nathaly Ramos, November 15, 2019
5/ 5stars
Incredible service with people who know what they're doing. If you're having trouble deciding, look no further than Perkins.