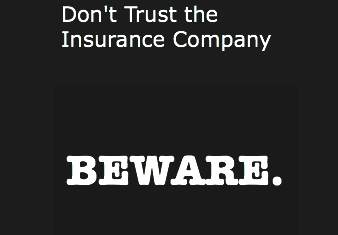 July 14, 2014. Always consult a Miami Personal Injury lawyer before giving a recorded statement to an insurance company or before signing any documents they may request! Just this past month Perkins Law Offices encountered two different insurance companies that attempted to either trick clients into saying things during a recorded statement that might have destroyed insurance coverage and to sign documents that would have waived their right to bring a lawsuit.

Miami Personal Injury lawyer Alex Perkins of Perkins Law Offices recovered the full $100,000 policy limits from Citizens Property Insurance on behalf of a client who fell off a ladder while trimming trees resulting in a severely broken wrist. Initially Citizens conducted their investigation with a bias against wanting to provide coverage to the homeowner. They looked looked for all kinds of reasons to deny coverage to the Homeowner despite them having paid premiums in the event of a an injury occurring on their property.

Anyone who is injured or has a friend or family member who is injured should talk to a lawyer before making statements or signing documents at the request of an insurance company. Perkins Law Offices is where to find your Miami Personal Injury Lawyer.