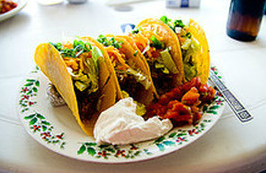 Miami New Times – June 22, 2009 Natalie O’Neil Â On a Sunday night last January, a bubbly brunette waitress named Courtney Rhon stopped for takeout at El Toro Taco in Homestead. The 32-year-old mother of two ordered a beef chimichanga and a taco dish for her 14-year-old son. There was food at home for her two-year-old. They ate together around 9 p.m., and then went to bed.

Around 2 a.m. Courtney awoke violently ill. She couldn’t stop vomiting, cramping, and sweating — and had to keep running to the toilet. When her mother, Margaret Armstrong, checked on her the following afternoon, she was still in bed sick. Her legs had turned purple.

Armstrong rushed her sick daughter to the emergency room at Homestead Hospital, where she collapsed and went into cardiac arrest. Doctors tried to revive her with little success. They pronounced herÂ deadÂ at 7:16 p.m. The cause of death: Bacterial infection of the blood. Courtney’s spleen had been removed more than ten years ago after an ATV accident, and her immune system couldn’t battle the bacterial strain.Courtney’s parentsÂ filed a lawsuitÂ against the restaurant June 4. It claims herÂ deathÂ was due to contaminated food and negligence on the part of the owners. The family-owned Krome Avenue joint served dishesÂ not “fit for human consumption”Â or “free of dangerous and potentially fatal bacteria,” the suit states. The family is seeking punitive damages for “loss of companionship” and “mental pain.”Courtney wasn’t the only one who got sick, claims the attorney for the dead woman’s family, Alex Perkins. Three days before her meal, a woman whom Perkins declined to name ate a beef taco and contractedÂ food poisoning. “It’s not hard to connect the dots,” he says.